I probably shouldn’t be so hard on the parents who think their perfect kids are the result of their perfect parenting (and think my kids’ issues are exaggerated, made up, or easily fixed by a mere cracking of the whip).

I could so easily have been one of them myself … if I had stopped after my first kid.

Apart from the first 12 weeks of ear-splitting, sanity-shattering, soul-shriveling colic, my first child was like Mary Poppins –

She was smart, talented, and studious …. she had beautiful handwriting, always did her homework impeccably and on time, was organized and graceful and sweet, and was an incredibly gifted artist and a superb gymnast … yep, practically perfect in every way.

I would love to take credit for all of that.

And I probably would have, too … if I hadn’t had my second child.

The other day, I was  comparing notes (read – “we both raised kids who are the reason we are now using more hair dye than the average bear”) with a friend from high school.

I mentioned how I could so easily have been that smug, “You just need to set limits/My child always does her homework” kind of mom … if I hadn’t had my “I’m a perfect parent” ass handed to me on a platter when Kid #2 came around. 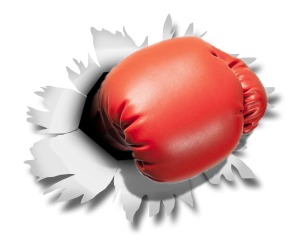 I’ve seen both kinds of families … the kind where you get knocked flat on your butt by punch #1 before the bell even rings to start the first round (this was Martha) …. and the kind where you’re standing there buckling on your I’m-The-King-of-the-World  Perfect Parent Championship Belt when all of a sudden, out of nowhere …  Pow!!! Right in the kisser! (that would be me).

As hard … and as humbling … as that Sucker Punch is, it does have its advantages, as compared with Option #1.

You know that “gnawing pit in your stomach” when you first start to realize that something is not quite right with your kid?

When it’s Kid #2, at least you have some kind of basis for comparison. And that can definitely help you identify issues and get some sort of treatment much earlier in the game.

It also helps take away some of the guilt involved with having a kid with issues. Face it – if you think your child is an extension of you and your parenting (as many parents of first and/or only children do …. they haven’t had that nature vs. nurture additional-child-experience in their homes yet) … then you may somehow feel responsible not just for your inability to “fix” the issues, but for the actual issues themselves … and ugh, that is an awfully heavy load to carry.

But if you have already had a “neurotypical” kid, it’s easier to know that you didn’t cause whatever is going on. (And by the way — those “neurotypical” siblings? They’ll probably land their own sucker punches on you later in the game, while you’re paying attention to Issues Kid …. )

Yes, I may still have little stars and birdies flying around my head from that Sucker Punch.

But it made me grow as a mom (and an individual), helped me identify and address what was going on without the added burden of feeling guilty about it, made me interested in learning more about different kids with different temperaments and different learning styles (which is absolutely what led me to become a teacher in my 40s), and gave me a “sh*t just got real” wake-up call which took me off autopilot, out of “I’m a perfect parent” mode, and into a whole new journey.

And maybe Martha put it best! I was a little stuck on how to wrap up this post, so I asked her what she thought. Here’s what she said:

Maybe write about how a good kick in the ass led to having to suddenly be innovative where traditional approaches didn’t work…how you developed a perspective and a compassion that you couldn’t have otherwise…..
You would’ve been one of those well meaning, advice-giving, snarky moms whose bumper-stickered “my kid is an honor roll student at blah dee blah” car “I” would have keyed…
And we probably would have never been friends!
🙂

19 thoughts on “The Sucker Punch”