Someone Buy That Woman A Drink! (One Fish, Two Fish, cont.)

As I continue to read my July 1998 journal, I don’t know whether to laugh or cry … because I think I hit every emotion possible within a page and a half on this particular entry below … including laughing, crying, and enough other emotions to make even Sybil’s head spin! (I imagine that famous multiple personality sitting me down and telling me, “You know, you really need to pull yourself together; you’re making the rest of us look like we’re slacking off !”) And this, all in one 50 minute swimming lesson….

Once again, I was sitting near the pool, although this time within view …. and both boys were taking lessons – my SPD/anxiety/dyspraxic 6-year-old son, “Jimmy,” and my super-coordinated, everything-comes-easy, fearless, 4-year-old son, “Joey.”

The lesson started out fine, and I wrote in my journal, “Jimmy is much more cooperative and adventurous in this lesson than he was the whole first week!” In fact, I was writing away about how his younger brother’s fearlessness at throwing himself into the water without swimmies had terrified me, but may have helped prompt Jimmy to put his own face in the water, which was such an improvement …. and I was trying to actually write about non-Jimmy-related things, too (imagine that!), since I seemed to be getting a break on the Jimmy front and actually had a minute to almost (almost!) relax and think about something else … when all of a sudden, things started to change. I’m posting what follows — this stream-of-consciousness journal entry — word for word, because this was my life. Geez.

Jimmy is now being a little less cooperative in the lesson. I’m trying to make myself invisible here so he doesn’t look at me and get nervous. He always falls apart when I’m around.

So, on to other things … here’s an article I should write: the worst job as a parent is having to tell your kids about the realities of the world. Especially the ones you can’t explain. For example, in the last week, I’ve had to explain to my daughter [my oldest child, then age 9] why someone would vandalize the playground we spent two years raising money to build; why someone would break in to the day camp and destroy the artwork her children’s art camp made; and why her two best friends from gymnastics would uninvite her from a sleepover she thought she was included in, and which we all thought had been planned for some time.

Now Jimmy is being really uncooperative. I can tell he’s hyped and working himself up. I don’t really know what to do. Now he’s negotiating with the teacher about how many times he’ll do a back float. He’s refusing to do a back float. Maybe watching Joey do it later today will spur him to do it tomorrow.

Back to the things we have to explain to our children. My friend just had to explain to her daughter that her cousin took his own life … How do you explain the inexplicable?

I’m having a hard time concentrating on this because I’m listening to Jimmy say “No, no, no!” to the swimming teacher. I don’t know if I should step in. I’m really trying to ignore it. He just took off the goggles. He is completely wired right now. Seven more minutes to the lesson. What a different experience than watching Joey — but equally stressful. I’m worried about Jimmy being uncooperative and losing it, whereas with Joey I’m afraid of his doing too much before he’s ready. With Jimmy I worry about his being too fearful; with Joey, I worry about his being too fearless.

I can tell that Jimmy is so hyped up right now that he’s almost incapable of calming himself down enough to cooperate and listen to the teacher. Maybe tomorrow and by the end of the week it will seem less unfamiliar. Maybe tomorrow it will be better. He’s trying to make himself go under now, but he’s afraid. He did it completely right at the beginning of the lesson, but probably because his little brother did it yesterday. But he got water up his nose. I think by the end of the week he will calm down and be able to do a lot of this stuff. If I survive this week and all these swimming lessons, it’ll be a miracle.

He put his head in again! He really did it – but looks a little surprised.

He just got out and told me, “Mom, I did real good today.”

I am really proud of him. 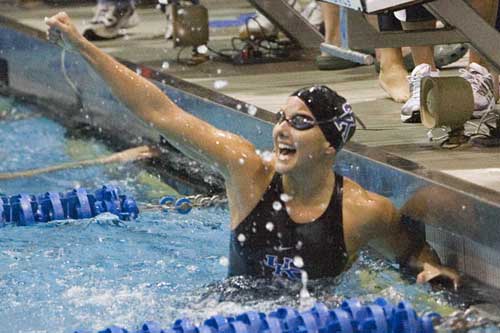 What that felt like, for him and for me …

Wow! I read that now, and feel that same rush of pride and happiness for my 6-year-old boy (even though he’s now 21)!

And I’m proud of myself, too, for making it through.

Now, someone please fix the space-time continuum so that I can go back in time, sit down with the “15-years-ago-‘me'”, put my arm around her and tell her she’s doing a great job and that it will get better …. and buy that woman a drink!